The Imperial War Museum is a military museum in the traditional sense. The example of war museums exemplifies how museum practice is evolving in terms of its approach to history. Previously, the museum’s aim was to tell the tale of the war, victory (Victory) from the victorious side’s perspective, and information on “unjustified” casualties, battles, and commanders (the British even laugh that the name – “Imperial War Museum” – has completely lost its essence).

The museum’s mission is to “display how war impacts people’s lives” and “understand the experience of wartime life.”Soldiers, children, women, and prisoners of war are the exhibitions’ heroes, and the exhibitions are built as specific stories about specific people, about how they were affected by the conflict, how they lived during the war, and what they did afterward.

I had expected to learn about the museum’s much older age during the planning and preliminary information-gathering stages of the visit (200 years, I thought – at least). The truth was considerably more modest: this specific museum was founded only roughly a century ago, in 1917.

By the way, the Tower of London, which houses the island’s oldest military museum, is close by. However, its current collection does not excite me; it is primarily a collection of weapons and armour, with little military equipment. But who knows, maybe I’ll get around to it eventually. In front of the Imperial War Museum’s main entrance in London. It’s mid-October, so take note of the weather and nature in imperial war museum gardens:

The battleships HMS Ramillies (near to us) and HMS Resolution each have two 381mm cannons.It’s worth noting that the Imperial War Museum has five branches, with the London Museum being just one of them. Imperial War Museum Duxford is one of the other sections (of which I only visited one more in three days). Just outside of Cambridge, there is a big aviation museum.

The cruiser HMS Belfast was a ship that served in World War II. She was in charge of, among other things, the northern convoys. She is permanently moored at Tower Bridge in central London, on the River Thames. I took a look at it and will provide a report as soon as possible.

The Churchill War Rooms were an underground complex that housed the British Government’s command center during WWII. I didn’t go because it was in the heart of London and was too pricey.

The Imperial War Museum North is the newest branch, which opened in Manchester in 2002.

The London branch is located in a small park to the south of the Thames River. After some roaming around, the museum finally settled at this location in 1936. Surprisingly, the structure once housed the Royal Psychiatric Hospital.

The Imperial War Museum is mostly dedicated to the history of the two world wars, but it does have more modern exhibits – until recently, the British were responsible for maintaining peace and order around the world (especially in the Middle East and Afghanistan). Isn’t it a sad joke about “restoring peace and order”? 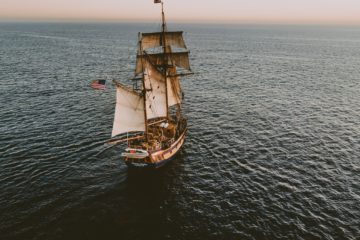 For a long time, ships have been an important part of human history. From hollowed-out logs to Roman Triremes, wind-driven ships to nuclear-powered supercarriers, nautical history has presented us with many significant boats that have Read more…

HMS Arethusa is a ship that sails around the world

In 1945, the HMS Arethusa was launched. Arethusa, a Royal Navy light cruiser Pennant number 26 Chatham Dockyard (Chatham, United Kingdom): Parsons Ordered on September 1, 1932 On the 25th of January, 1933, it was Read more…